Subramaniam Ramadorai is the Chairman at the Axis Bank Foundation, Advisory Board Tata Strive, AirAsia, and Tata Technologies. He is also the member of the Board of Directors of the Piramal Group and the Hindustan Uniliver. ‘Ram’ for those who have worked with him, he comes across as a person who is steeped in simplicity and discipline.

Subramaniam Ramadorai’s education in America made him the first in his family to study from the USA. After completing his education S. Ramadorai worked at TCS for 42 years, finally reaching at the top post succeeding the first CEO of TCS F. C. Kohli. After his retirement, Subramaniam served the Tata group in various capacities including Vice Chairman of TCS, member of the Board of Directors at Tata Industries and Chairman of Tata Advance Systems Limited, Tata Elxsi, CMC and CRL. Along with it, he was also associated with many non-Tata companies and educational institutions. He was the Board member at MIT Sloan School of Management and also served as the chairman of the governing body of TISS.

The giant Tata group is one of the oldest and most reputed business groups in India. Whatever may have been its fortune in the past as a whole group, one of its operations stand still – the Tata Consultancy Services, the company which grew from only 25 employees to over 4 lakh employees and worth $1000 billion. 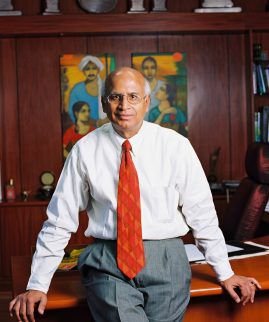 S. Ramadorai’s TCS journey started as a junior engineer and ended with finally taking over as the CEO in 1996. When he took charge of the company as the CEO revenues were Rs. 600 crores, thirteen years later when he left TCS, the company was worth over Rs. 36,000 crores. Subramaniam Ramadorai became the main force establishing TCS a global IT giant. Under his aegis, the company’s strategy and business model developed at a rapid speed. In 2002, he was ranked among the top 25 most influential consultants in the world, which made him the first and the only Indian CEO to rank there.

In 2002, when Subramaniam Ramadorai was the CEO of TCS, he was worried about the increasing number of employees drifting apart. His wife, Mala suggested him to engage the company’s employees and their families in non-work activities. The idea was to bring the employees together. Following her advice, S. Ramadorai introduced the concept of “Maitree” which means friendship. It incubated sports clubs and hobbies, cultural activities, trekking, etc, which today have grown into formal employee engagement activities. He claimed that it has emerged as a community work and the activities are defined as per the local needs. The activities could be raising funds for charity, teaching English and computers and a lot more. Adult Literacy Programme (adopted by National Literacy Mission), Childline which is children in distress helpline, fundraising to support the society for the Rehabilitation of Crippled Children (SRCC) are some of the formal efforts initiated by Maitree. S. Ramadorai has also served as the President of SRCC. He has been in public service since he retired from TCS in 2011. In February 2011, he was appointed as the Chairman of the National Skill Development Corporation (NSDC) and National Skill Development Agency (NSDA). Subramaniam Ramadorai was also appointed as the Skill Development advisor (equivalent to the rank of a Cabinet minister) to the then Prime Minister Dr. Manmohan Singh. It was during his tenure in 2015, as the advisor to the Prime Minister when the Government of India’s scheme ‘Skill India’ was launched. He believed that the main challenge to skill youth is the high dropout rates in 8th, 10th and 12th grades. According to Ramadorai, the probable solution to this problem was the introduction of vocational education along with the conventional education.

Although, Ramadorai feels that people are hesitant about these vocational studies and consider them inferior to the conventional. To resolve these issues, he remarked, that their organization had partnered with NGO’s and organizations like TISS and corporates like TATA, Birla, etc, to work upon this together. S. Ramadorai also served as the Chairman of the Advisory Board at Tata Strive, Tata group’s CSR skill development initiative. In an interview, he stated that Pt. Nehru had given 2.5 acre of land for the treatment of polio-afflicted children in Mumbai. As the land was available, he got involved in building a super-speciality hospital for children with 150 beds worth Rs 85 crore, in first phase at the location in concern. Second phase will cost 150 crores for additional 200 beds. The initiative is run by SRCC. In recognition of his commitment and dedication to the IT industry, S. Ramadorai was awarded with Padma Bhushan, third highest civilian order in 2006. He was also honoured with the ‘Commander of the Order of the British Empire’ by Queen Elizabeth-II for his contribution to the Indo-British economic relations. Among many other hobbies and interests, Ramadorai is passionate about Indian classical music and photography. His wife Mala is an accomplished musician, a Hindustani vocalist and also an active educator. S. Ramadorai’s son-in-law Natrajan Chandrasekaran is the Chairman of Tata Sons and was the CEO and executive director of TCS.

Contrary to the common belief, Subramaniam Ramadorai got busier after his retirement. All the credit goes to his commitment towards social work, which he able to undertake due to time crunch when he was in TCS. At present. Ramadorai  looks forward for more such opportunities where he could serve the society in a more informed and better way.