Sanjay Dalmia, a leading industrialist and philanthropist, recently organized an event to evoke and honor the Maratha achievements. Held in association with Mr Dalmia’s NGO, Bharat Maa Shaheed Samman Trust, the event was organized at the Rooftop, Trident in Mumbai. 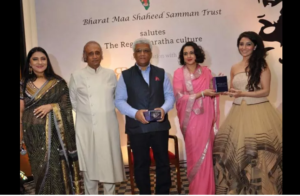 Adorning a pink chiffon saree, Maharani Radhika Raje recollected her memories of adapting to the Maratha culture after her marriage, since she is originally a Rajput Princess from Wankaner. She stated how she enjoys promoting the culture at various events.

Maharaja Samarjitsinh Rao Gaekwad, too, expressed his views eloquently and entertained the assembled dignitaries with his witty remarks. He amused the audience with his interesting tidbits about growing up with Maratha cultural influences.

Commending the Marathas, their warriors and rulers for their valor, Sanjay Dalmia called Chattrapati Shivaji the greatest of all. He said that there is much more to Maratha achievements, which not everyone is aware of.

According to Mr Dalmia, they were the real heroes who have created milestones in various subjects including art, culture, politics, science, etc. He further highlighted how the first plane was created and flown by an Indian pioneer Shivkar Bapuji Talpade, a Maharashtrian at Chowpatty several years before the Wright Brothers.

Shaina NC, the Chief Guest applauded the Maratha achievements of people from Maharashtra. She said that these people have been making the nation proud by creating excellence in various walks of life. She further highlighted the fact that some of the best politicians of India have been from Maharashtra.