Government to rejig The Companies Act; firms to be penalized for inadequate CSR spends

Government to rejig The Companies Act; firms to be penalized for inadequate CSR spends As a repercussion of the recent fallout of the IL&FS scandal,  the government has decided to make amendments in the existing Companies Act, which would also take into account all the companies who do not meet the mandated 2% spends on the CSR activities’, and also towards “fit and proper” criteria for debarring directors from holding board positions.

What was the recent IL&FS scandal?

Infrastructure Leasing and Financial Services (IL&FS) a group company, defaulted in payment obligations of bank loans (including interest), term and short-term deposits and failed to meet the commercial paper redemption obligations due on September 14.

As a counter initiative to the rising situation of credit crisis, the government moved National Company Law Tribunal (NCLT) to supersede the IL&FS board and change the company management but realised that it can do little to bar the disqualified directors including some top names of the corporate sector, from holding board positions as the new Companies Act did not provide for.

What does the amendment propose?

Under the proposed amendments, if a company has any unspent amount in a financial year, it needs to be directed to the CSR account and spent within three financial years. If the company fails to spend the amount within the specified time, it has to be transferred to a Central Government-created Fund specified in Schedule VII. 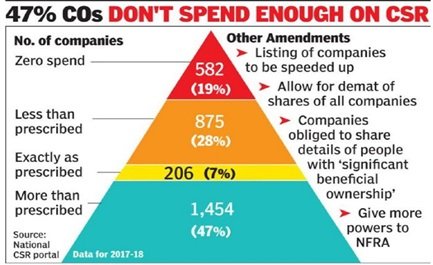 Looking at the proposed changes, Aseem Chawla, Managing Partner, ASC Legal, a law firm, said: “The proposed amendments to CSR provisions would clamp down on CSR irregularities; as non-compliance would invite invocation of penal provisions and authorise the issuance of directions to companies to adhere to CSR provisions.”

Saurav Kumar, Partner, Induslaw, a law firm said “Corporates took advantage of the loophole and viewed CSR as a voluntary exercise. With the current amendment, there will be some seriousness to the process as the loophole has been plugged.”

Initially, with under CSR obligations that covered disclosure of the required CSR funds by companies as a part of their fiduciary duty, 2% of the fund’s allocation is now considered mandatory.  The non-compliance of these CSR obligations would call for penalties, as stated by the board.